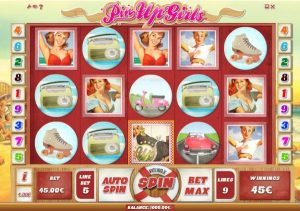 Pin Up Girls Slot is a standard online slot game, consisting of 5 reels, although with an unusual amount of paylines at 9. Other than the low paylines, the mechanics of the game are similar to most slots, where players choose the amount they want to bet, spin the reels, and the earn winnings through different symbol combinations.

Setting up a betting amount is done through three different options. The first is the amount of active paylines the player may want, with a minimum of 1 to a maximum of 9. Next, players can choose how much is bet per line, which both increases the total bet amount, as well as the amount that can be won back. Thirdly is the value of the coins, which starts at 0.01 and ends at 1.00. Every one of these choices will determine the total winnings earned at the end of every successful spin.

Landing different symbols in certain combination adds up to various win amounts, where landing the suited man five times in a row means a return of 2500 coins, while the lowest value symbols pay a max of 30 coins if 5 are landed at once. Symbol value, combinations, and the rules of the game can be seen when a player press the info button, if players want to learn more about the game.

About Pin Up Girls Slot

In Pin Up Girls Slot, players are transported back to the 1950s, when pin up girls were all the rage. Beautiful women wearing all manner of revealing outfits could be found across countless magazines in the United States of America. Even to this day, the pin up girl is still a strong part of popular culture in the west, and many modern fashion and glamour magazines were inspired by the pin up girl.

Pin Up Girls Slot features everything that could be found in an old 1950s fashion magazine, with the girls themselves, a gorgeous beach in the background, and a young man who stares out at the different girls on display. The symbols in the game are no different, with models, convertible cars scooters, radios, and skates all reminiscent of an age long past. The game is powered by iSoftware, a software developer.

The wild in Pin Up Girls Slot is a model with red hair, and acts as a substitute for all symbols in the game, apart from the scatter and bonus. Additionally, landing the wild on the centre of the second or fourth reels will give the player an instant ten free spins.

Lastly, the bonus symbol of the game, shown as the logo of Pin Up Girls Slot, is the symbol required to trigger the bonus game.

Once the bonus game is triggered, players of online or mobile pokies NZ will be taken to a new screen where a blank wall and a basket containing posters are shown. Players can then take one of the posters and pin it up against the wall, and the longer it remains stuck to the wall, the more coins that will be earned. Once the poster has slipped off the wall, the bonus game ends, and the player retains all winnings made.