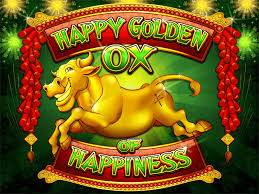 The Happy Golden Ox is the Wild symbol, and the Year of the Ox is the Scatter symbol. Other symbols include Chinese Characters, a masked dancer, a Chinese lantern and a Firecracker of course, and a Vase and Fan, and the digit 8.

The Happy Golden Ox of Happiness will appeal to both new and experienced players alike, as the illustrations are simple but interesting. The game features five reel and 50 pay lines. The Year of the Ox symbol will result in Scatter payouts, and will also trigger the free spins bonus round.

The Background and the Symbols in a Chinese Style

The action in Happy Golden Ox of Happiness takes place in a Chinese street, and all the graphics including the symbols are pictured in a Chinese style of drawing. The Happy Ox is the Wild symbol, and when it appears in a winning combination it results in some stunning animation and sound effects.

If the Happy Golden Ox of Happiness symbol appears simultaneously on reel 1 and 5 it will activate the Re-Spin Feature. This means these two reels will pause while the other three reels will re-spin, and continue spinning up to eight times. The multiplier will keep growing by one with each re-spin. If three or more of the Scatter symbols appear anywhere on the reels it will result in a Scatter win, which is multiplied by the value of the original bet. Five Scatters will give the player a payout of 188 coins, and three or more of the Scatters appearing will trigger the Free Games feature. This offers the player eight free spins at payouts of triple the value of the bet. The Free spins can be retriggered, as can the Re-Spins feature.

The progressive jackpot cannot be hit during any of these bonus rounds. During the free spins round, a hit of five Happy Ox symbols on a payline will increase the player’s bet by a huge multiplier. 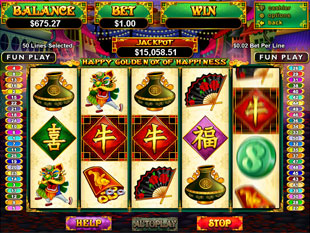 The progressive Jackpot in the Happy Golden Ox of Happiness cannot be won from the re-spin or free game features. When they are won, the amount is added to the other wins made by the player during the game.

The highest fixed jackpot is 2888 coins, which is won when the player hits on five of any of the Chinese Character symbols appear in a pay line. The second highest jackpot if won when five of the Masked Dancer symbols, or the Chinese Lantern or the Firecracker symbols appear together on a payline. This amount is 888 coins. These fixed jackpot wins are a special feature of Real Time Gaming’s Happy Golden Ox of Happiness.